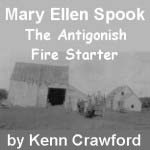 "My Experiences at the MacDonald Homestead"
by H. B. Whidden

...written exactly as it is appeared in the publication. This means that all original spelling mistakes are included in the digitized version.

Because it was felt that the publication of my experiences in the public press might lead to the misunderstanding and result in endless controversy, it was the decision of some of my friends best qualified to judge the public mind, that as the report of the happenings at the Macdonald homestead on March 10, were of such a sacred and personal nature, it would be unwise to give them indiscriminate circulation through
the newspapers.

This pamphlet is therefore printed and circulated for the information of friends,Whom I feel will appreciate that, to have had these facts placed in some homes would not have been in the best interests of the general public.